This week is off to a helluva start.

Somebody, somewhere has to come to this guy’s defense. It might as well be me.

According to a story in the Portland Press Herald, this guy remarked at a Maine Republican Party fundraiser on Aug. 12 that Barack Obama could have been the best president ever if he’d only highlighted his biracial heritage, but that Obama couldn’t do that because he “hates white people.”

The governor made the comment during a Maine Republican Party fundraiser on Aug. 12 at the home of John and Linda Fortier in Belgrade. According to the invitation, the fundraiser was a “meet and greet” for LePage and first lady Ann LePage, and an opportunity to meet Rick Bennett, the new party chairman.

OK . . . people with brains should be furious about this, if LePage said it.

NOBODY WILL GO ON THE RECORD SAYING HE DID.

That’s what’s really disgusting here. LePage’s accusers, according to the Press Herald, are “two state lawmakers who say they heard the remark directly,” but who don’t have the cojones to reveal their names.

The lawmakers, both Republicans, confirmed the comment when asked by a Portland Press Herald reporter but asked that their names be withheld for fear of political retribution.

So what we have here is a guy who is essentially being called a racist by two snakes who swear he said it but who don’t have the nerve to tell us who they are. 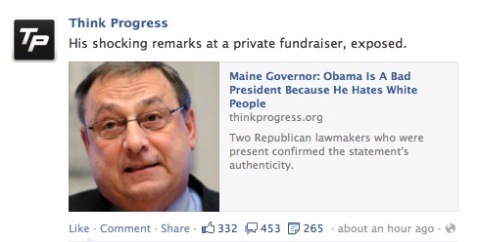 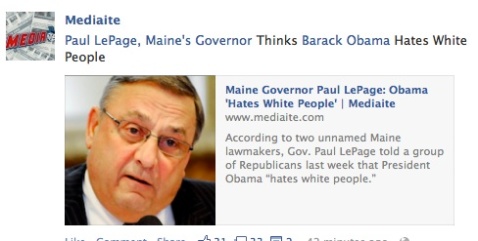 And nowhere is there an accuser willing to go on the record.

Where I come from, we call this character assassination. If you’re going to call someone a racist, then have the decency to come out from behind the curtain and let me see who you are.

So the Bronx cheer here goes to those two unidentified Maine Republican legislators who “confirmed” this story, and to the Press Herald, and to Think Progress, and to Mediate, and to MSNBC, and to anyone else who ran with it without getting someone – anyone – to go on the record.

Our guy Teddy has decided to renounce his Canadian citizenship, because why exactly? Are you somehow embarrassed that you were born there? Do you really feel that you are somehow less American if you have dual citizenship? Do you think that anyone – anyone – will seriously question your loyalty to Texas or your loyalty to the United States just because of this? . . .

Or are you renouncing your citizenship because you’re deathly afraid of what this clown might say? . . .

Teddy, renouncing your dual citizenship is silly. You’re an American. You don’t have to  do stupid stuff to prove it.

Valarie (Geez, I Never Thought of That) Hodges

We’ve saved the best for last.

Our gal Val is a representative in the Louisiana legislature, and she was very supportive of a law backed by Gov. Bobby Jindal that, according to livingstonparishnews.com, “proposed, among other things, a voucher program allowing state educational funds to be used to send students to schools run by religious groups.”

But Val has changed her mind, because it has come to her attention that there is more than one religion in the world.

[S]he had no idea that Gov. Bobby Jindal’s overhaul of the state’s educational system might mean taxpayer support of Muslim schools.

“I actually support funding for teaching the fundamentals of America’s Founding Fathers’ religion, which is Christianity, in public schools or private schools,” the District 64 Representative said Monday.

“I liked the idea of giving parents the option of sending their children to a public school or a Christian school,” Hodges said.

Really, you can’t make this stuff up.