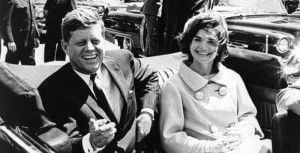 Miss Bromley’s floor was swept and clean, the school week was over and it was time to go home, a daily trip that involved walking a couple of blocks to the corner of Livingston and Smith, where I caught the Flatbush Avenue bus to the corner of Flatbush and Farragut, where I transferred to the Ocean Avenue bus, which took me to Avenue N, around the corner from my home.

And the president of the United States was dead.

It was a long daily commute, and this being Brooklyn, the only daily constant was noise. But on this afternoon, the silence was deafening.

But on November 22, 1963, the only thing you heard was nothing, and the only face you saw was one of sorrow. You could break down and cry, or you could hold it in. Either way, you felt empty inside. And, even at 13, I knew for sure that the world would never be the same. You had Pearl Harbor, Dad. I had this.

All I wanted to do was get home and turn on the television. To see pictures of Lyndon Johnson taking the oath of office; to see the casket carrying the president’s body being taken off a plane; to see the first lady, a woman so radiant, so magnificent, now so evidently in shock; to learn about a suspect named Oswald who had shot and killed a cop named Tippit and was believed to be the man who killed JFK.

And to get ready for Chuck’s Bar Mitzvah.

There were two events that weekend that would not be changed. One was on Sunday, a full schedule of NFL games. The other was Chuck’s Bar Mitzvah. Some things just can’t be postponed or cancelled, I guess. The NFL, of course, had no excuse. But people were going to go to synagogue, for good reason, on Saturday, and a Bar Mitzvah is part of the process.

I have no idea what sort of conversations took place between my mom and Chuck’s mom — they were and remain the best of friends — on Friday night, but I do know that we got up on Saturday morning, got dressed and went to synagogue, and that Chuck read his Haftorah flawlessly.

But this was the unhappiest happy occasion ever. Yesterday, somebody killed the president. Today you are a man. Muffled sobs could be heard throughout the shul, especially when the rabbi brought up the assassination in his sermon.

And then it was time to celebrate. But how do you celebrate when you know mourners are lining up to file past the casket of the president? How do you party when a young widow is mourning the death of her husband, and a world-famous little girl and her very little brother have suddenly lost their father?

We picked at our chopped liver, barely ate our roast beef and went home. Saddest Bar Mitzvah ever. All we wanted was to get back to our TVs.

The next day, my mom decided I’d had enough. She handed me my ice skates and told me to get the hell out of the house. I protested and lost. The TV was being turned off. 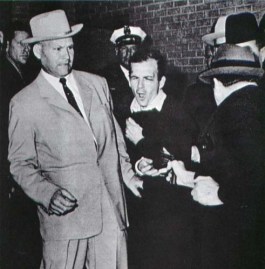 I took the bus to Prospect Park — I think I went with a friend, and it’s entirely possible that it was Chuck, but I really don’t remember. And so it was that I was skating around the Kate Wollman Memorial Rink when the next shock occurred. I was leaning against the boards when the word spread that Oswald had been shot.

My reaction? Totally appropriate for a 13-year-old:

It wasn’t until later that I’d understand the ramifications of what had just occurred: That 50 years later, we’d still be asking who killed the president, and still be talking about conspiracies and grassy knolls and second gunmen and all the rest.

Fifty years. And I still remember the weekend, in slow motion, frame-by-frame. My Pearl Harbor.