We didn’t start the fire, until we did

The story in my local paper carries the headline:

And no, this is not about the missplaced comma in the hed. This is about a bunch of religious wackos defending their right to endanger children. In my country. In my state. In my county.

Rockland County (NY) Executive Ed Day recently announced that “the state [has] given the county permission to inspect 53 private schools, mostly in Ramapo and Spring Valley, for fire and building code compliance.”

That’s good, right? When a school goes up in flames … or collapses due to faulty construction … that’s a bad thing, right? We try to make sure that doesn’t happen, right?

Well, yeah, in most places. But this is Rockland County, aka Yeshivaland, where common sense just doesn’t apply.

A newly formed group of Rockland yeshivas has warned County Executive Ed Day that they believe his zeal for inspecting private schools violates the U.S. Constitution.

Members of what is being called the School Religious Freedom Coalition want a meeting with the state education commissioner to discuss a “reasonable” plan for carrying out fire and safety code inspections at local private schools.

Dennis Lynch, an attorney for the group, said organization members support the need for inspections and having safe schools for students but believe Day’s goal is to limit the growth of private schools.

They also feel the county executive’s language at a press conference last week was “inflammatory” and prejudicial, Lynch said.

And what did Day say?

“We will not be forcing in doors, though we can under the law,” Day said. “That would be counter-productive. We’re not going to be deterred and we’re moving forward.”

Well, we won’t have any of that. Moving forward is everything the community in question opposes. Moving forward, apparently, is a violation of their religious rights.

I have no doubt that, sooner or later, one of the scores of yeshivas in Rockland County will go up in flames, and a few dozen children will perish in the blaze, and then the people who run them will inevitably find a way to blame the government — and demand government assistance to help the survivors.

What compounds the problem is that if you oppose this particular group of 17th century throwbacks on anything — whether it’s safety inspections in their schools … or their domination of a public school board and their denying a decent education to their public school students … or their alleged misuse of federal technology funds in their schools and libraries, since many of the schools prohibit their students from using the internet …

What happens when you oppose them on stuff like this is you get accused of being an anti-Semite.

And that is particularly offensive to me because, by accident of birth, I am associated with members of this community. We share a heritage. Like them, I am a descendant of Moses and Aaron. Like them, my forebears came here from Eastern Europe.

But unlike them, I have escaped the shtetl. I’ll have me a big plate of internet cheese, with a side of bacon, thank you very much.

So I would like to say to my distant cousins: You’re dead wrong about about a whole lot of stuff. And if you think that makes me an anti-Semite, then your long beards are interfering with your brains.

You want to see real anti-Semites? Check out the latest on Jonathan Weisman or Julia Ioffe. There are real anti-Semites out there, and your actions only encourage them, because you may be in the majority in some of our county’s villages, but you are just a tiny sliver of a very small minority that has been persecuted throughout the world over the course of millennia.

And, to put it bluntly, you’re making things harder for the rest of us.

So, please … Either show me where it says in the First Amendment that religious groups have the right to endanger the lives of children, or STFU.

When the same aforementioned group of religious wackos decides it has the right to deny equal rights to others.

According to The New York Times:

Four times a week this summer — Mondays, Wednesdays and Fridays from 9:15 to 11 a.m., and Sunday afternoons from 2:45 to 4:45 — a public swimming pool on Bedford Avenue in Brooklyn will be temporarily unmoored from the laws of New York City and the Constitution, and commonly held principles of fairness and equal access.

The pool will instead answer to the religious convictions of one neighborhood group. At those hours, women (and girls, too, on Sundays) will have the pool to themselves. Men and boys will not be permitted. Orthodox Jewish beliefs demand modesty in dress, and a strict separation of the sexes, and those are the beliefs to which the taxpayer-owned-and-operated Metropolitan Recreation Center will yield.

It’s been that way, and wrongly so, for years — not because it was legal, but because nobody complained. Until recently, when “an anonymous complaint led the city’s Commission on Human Rights to notify the parks department that the policy violated the law. Then a new pool schedule was issued, with the women’s hours removed. That alarmed female swimmers, who alerted politicians, including the local assemblyman, Dov Hikind.”

Hikind — did we mention that he’s a lawmaker? — did what Hikind always does. He sided with his band of separatists, laws be damned. Hikind couldn’t stand the thought of men seeing women in bathing suits and women seeing men in bathing suits and having them dip their privates into a bucket of water together, so he persuaded the parks department to re-establish its blatantly illegal policy of “women-only” hours.

Then he declared it a “major victory for human rights.”

“I also want to thank the numerous women from Williamsburg, who reached out to express their disappointment on the program’s closing,” he said. “It just goes to show that it pays off to stand up and always fight for what you believe in.”

Even when it’s wrong.

Listen up, cousins … You want your privacy? Build a private pool.

Linda came back with this:

And today, she sent me this:

You can’t make this stuff up. 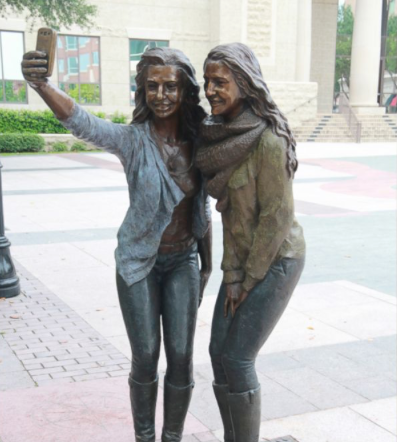 Yes, that’s a statue, erected outside the city hall in Sugar Land, Texas. Because nothing says America like two women posing for a selfie.

According to ABC News, the statue …

was part of a 10-piece sculpture collection paid for by a generous resident, according to a press release put out last month by the city, saying that the sculptures were “donated by a Sugar Land resident to the city through the Sugar Land Legacy Foundation.” The donor was identified as Samuel Levin. He could not immediately be reached by ABC News for comment.

I suspect Levin has gone into hiding, because … A SELFIE?!?!

Fortunately, not all the statues were as silly. Here’s another one, much more to my liking:

Has anyone seen Chelsea Handler?

Her old show on E! or wherever it was aired was pretty damn funny. So funny that the aforementioned Linda and I went to see her at Carnegie Hall a couple of years ago, and she was damn funny there, too.

So what’s up with the new Netflix show? We watched the first two, and you know what they say about fool me once, fool me twice?

So this really comes as no surprise:

But it strikes me as akin to what happens all the time in baseball: When you can’t fire the team, fire the manager.

On Memorial Day weekend, Trump spoke to a gathering of veterans and bikers in Washington, and managed to both drop Bobby Knight’s name and complain about the small crowd. “I thought this would be like Dr. Martin Luther King, where the people will be lined up from here all the way to the Washington Monument,” he said.

On Tuesday, Trump said he was just joking. Let’s accept that at face value and agree that he simply made a humorous remark in which he compared himself to a slain civil rights leader.

More from the AP Stylebook:

egg rolls
Chinese-American dish in which fillings are rolled in a wonton or other wrapper, then fried or sometimes steamed or baked.

Major League Baseball suspended veteran outfielder Marlon Byrd for 162 games — that’s a full season, folks — without pay after he tested positive for Ipamorelin, a growth hormone releasing peptide. Byrd said in a statement that he would not appeal. 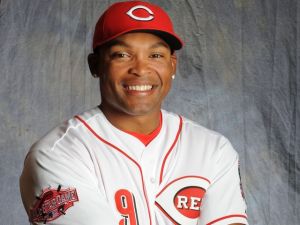 Byrd is only the third player to be given a full-year suspension for PEDs, which is what you get when you get caught using for the second time. The others were Alex (I Coulda Been Somebody) Rodriguez and Jenrry (I Never Was Nobody) Mejia. And Mejia struck out swinging. He got caught a third time and has been banned from baseball.

Byrd is 38. The Atlanta Braves have a better chance of winning the World Series this year than Byrd has of ever appearing in another Major League game.

I just don’t get it. If you’re a Major League ballplayer, you just know somebody’s going to come on over one of these days, hand you a little cup and tell you to take a leak. If you’re taking something like Ipamorelin, YOU WILL GET CAUGHT! It’s not like it’s an addictive drug. Why on earth would you go there?

The Hill reports that “The media is firing back at Donald Trump over his takedown of the political press on Tuesday.”

“He’s just a very inaccurate reporter. He’s not a good professional. He doesn’t have what it takes. And he writes very inaccurately,” Trump told the Daily Mail. “He’s got an ax to grind.” 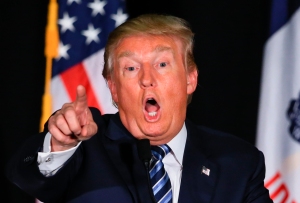 The press won’t take this lying down, of course:

“Any American political candidate who attacks the press for doing its job is campaigning in the wrong country,” National Press Club president Thomas Burr said.

CNN’s Dana Bash got in her two cents, too:

“It’s our job to ask questions of leaders. It’s a fundamental requirement and responsibility of a free press. It’s what makes us different from North Korea and other places.

And a word from Karl Rove:

“I’m not certain it helps him with the people who are swing voters, up for grabs, and it certainly is very unpresidential,” Rove said Wednesday morning on Fox News’s “America’s Newsroom.” “It would not be a good spectacle for our country to have a President Trump acting like Candidate Trump acted yesterday.”

Play me a tune, Mr. Drumpf

While we’re on the subject of the Von Clownstickster, I’ve found just the right song for the guy, now that the Rolling Stones have told him to stop startin’ me up.

I think this little ditty from Keb’ Mo’ will do just fine:

Drumpf is the gift that keeps on giving. Check out Tom Toles in today’s Washington Post: 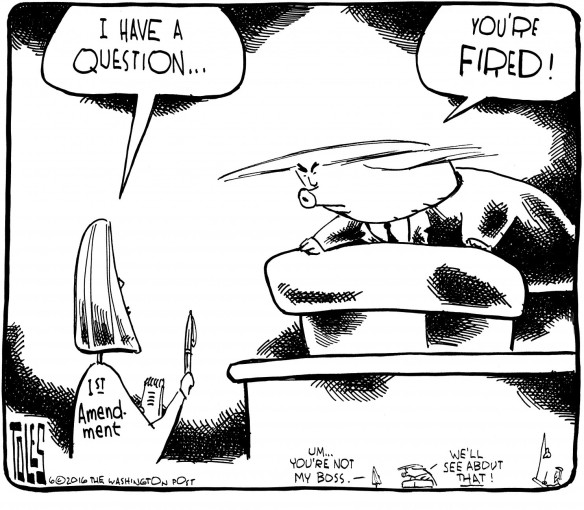 Today is the 30th anniversary of the day the U.S. Senate opened its doors to C-Span2, presenting gavel-to-gavel coverage of its proceedings to the viewing public.

Sad to say, the very first day may have been the chamber’s most entertaining. See for yourself.

Be sure to watch to the end, because Sen. Howell Heflin’s sonnet is Must See TV.

And I couldn’t help but notice that Heflin was a DEMOCRAT from Alabama. Times have certainly changed.