You don’t know me, but you’ve been inside me, and that’s why we’re here today.

Those 15 words — and the 7,102 that followed — were spoken in a courtroom by a now 23-year-old woman to the man who raped her, while unconscious, next to a Dumpster behind a fraternity at Stanford University a year and a half ago.

They may well be the most powerful words I’ve ever read.

They should be required reading in every high school, in every college, in every bar, in every locker room, in every military installation and in every workplace in America. In fact, they should be read, in full, at halftime of the next Super Bowl. We can skip Beyonce for a year.

If you haven’t read the words already, then, please, read them now. I’ll wait.

Welcome back. What I want to discuss here is heroes. But first we have to dispense with Brock Turner, rapist, and his idiot dad, Dan. Now that you know the background, I’ll try to make it quick.

Brock the Rapist wrote a statement in which he blamed his behavior on alcohol, on Stanford, on social pressure, on the party atmosphere at college … on everything but the handsome guy he sees in the mirror.

And then his idiot dad, Dan Turner, doubled down, writing a letter to Santa Clara County Judge Aaron Persky in which he described his kid as the sweetest and cutest rapist on god’s earth.

“My fondest memory is of helping Brock prepare for his weekly spelling test,” Dan the Enabler wrote. And then he went straight to the heartstrings:

He will never be his happy go lucky self with that easy going personality and welcoming smile…. Brock always enjoyed certain types of food and is a very good cook himself. I was always excited to buy him a big ribeye steak to grill or to get his favorite snack for him…. Now he barely consumes any food and eats only to exist. These verdicts have broken and shattered him and our family in so many ways. His life will never be the one he dreamed about and worked so hard to achieve. This is a steep price to pay for 20 minutes of action out of his 20 plus years of life.

Yeah, he wrote that. To Dan the Enabler, that’s all it was: 20 minutes of action! Like a videogame, only one that ends with a real live woman lying on the ground next to a Dumpster, unconscious and naked from the waist down, with a man on top of her, doing what rapists do in 20 minutes of action.

And Dan the Enabler knew exactly whom to blame:

In hindsight, it’s clear that Brock was desperately trying to fit in at Stanford and fell into the culture of alcohol consumption and partying. This culture was modeled by many of the upperclassmen on the swim team and played a role in the events of Jan 17th and 18th 2015.

Yup. Blame the beer. Blame the culture. Blame Stanford, a well-known institution of higher drinking and raping. Blame everyone but your son, Brock, because he’s the real victim here.

It’s just awful, really, that 20 minutes of action can kill poor widdle Bwockie’s shot at being an Olympic swimmer.

Which brings us to the third idiot: Judge Aaron Persky, the most famous judge in California who isn’t Mexican.

Contrary to what you may have heard, Persky the Lenient gave Brock a life sentence, provided Brock manages to die within three months.

That’s right, Persky the Lenient sentenced the kid to all of six months in the county jail, which means he will be released in three months if he behaves well behind bars. (Advice to Brock: Avoid raping fellow inmates.) After that, aside from being on probation for three years and having his name placed on a list of sexual offenders, the kid’s home free. Everybody into the pool!

“The question that I have to ask myself is … Is state prison for this defendant an antidote to that poison?” Persky said, as reported in Palo Alto Online. “Is incarceration in prison the right answer for the poisoning of (the woman’s) life?”

We could discuss stuff like how people are serving life sentences for possessing marijuana while Brock the Rapist gets out in three months, but, really, what’s the point? You can’t compare a serious crime like drug possession with a trifling thing like rape, which we all know is just 20 minutes of action.

And besides, Brock is handsome and blond and a great swimmer. 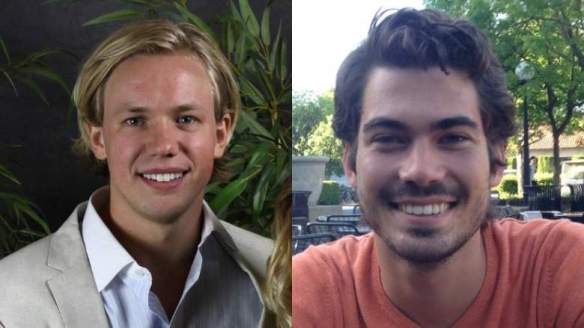 But that’s enough about Brock the Rapist and Dan the Enabler and Persky the Lenient.

I want to talk about heroes.

A year and a half ago, Carl-Fredrik Arndt (above, on the left) was a teaching assistant in math and engineering while pursuing a doctoral degree at Stanford University. Peter Jonsson (on the right) was studying for a Master of Science degree in management science and engineering, which he received in May.

That should be reason enough to be proud of these two lads from Sweden. But there’s much more, because these guys were riding their bicycles — to a frat party!!! — one day in January 2015 when they saw something horrible as they pedaled past a dumpster behind the frat house. A young man and a young woman were on the ground, and, according to Arndt, Jonsson saw the woman wasn’t moving, and the man was on top of her, “thrusting.”

Arndt and Jonsson got off their bikes, and Jonsson asked loudly, “What the —- are you doing? She’s unconscious.”

That’s when Brock the Rapist got up and started running, leaving his prey unconscious and half-naked by the dumpster.

The Swedish guys chased him, caught him and held him down until the police arrived.

So it turns out that Brock the Rapist and Dan the Enabler were wrong. Some guys actually go to college not to drink and rape women, but to get an education — and to do something when they see something.

Jonsson and Arndt could have just kept on pedaling like it was none of their business, but heroes don’t behave that way. Heroes make it their business.

Let the victim known as Emily Doe say the rest:

“… thank you to the two men who saved me…. I sleep with two bicycles that I drew taped above my bed to remind myself there are heroes in this story. That we are looking out for one another. To have known all of these people, to have felt their protection and love, is something I will never forget.”

There’s one more hero in this story. It’s a 23-year-old woman known only as Emily Doe. Read her words again, and this time keep reminding yourself that she spoke them in a courtroom to the man who raped her.

Emily Doe stared into the face of the man who tried to break her spirit, and she spoke words powerful enough to move mountains.

And that’s why we’re here today.

1 thought on “We can be heroes”