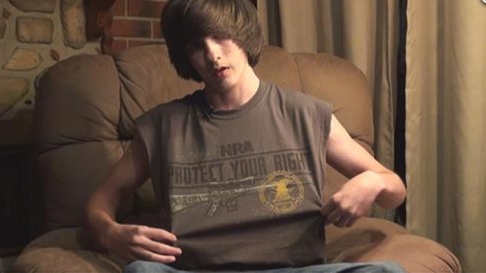 The West Virginia eighth-grader arrested after refusing a teacher’s demand he remove a National Rifle Association T-shirt he wore to school won’t face criminal charges after all.

Jared Marcum, 14, was charged with obstruction following the April 18 incident after police who were called to Logan Middle School school said he refused to stop talking. The case generated national headlines, as Marcum’s family and attorney, Ben White, claimed the demand that he remove the NRA shirt violated his right to freedom of speech. On Thursday, Logan County Circuit Judge Eric O’Briant signed an order dismissing the charge.

The kid should have taken off his shirt. Most schools have rules prohibiting “message” shirts and inappropriate clothing, and this clearly was qualified.

But arresting the kid was just stupid. All it did was make him a hero.