Bill Mazer, The Amazin’, died last week at the age of 92.

Alberta Magzanian, the Toughest Teacher in the World, will be honored by her former colleagues and students somewhere in Maryland this weekend.

There is a connection.

Pull up a chair, kids, and I’ll tell you the story of how a radio sportscaster is the reason the Toughest Teacher in the World gave me an ‘F’ on my American History final in my senior year of high school. 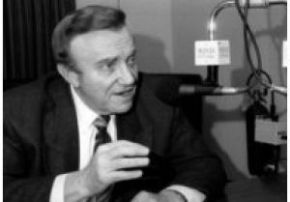 First, let’s talk about Mazer, who had a call-in sports show on WNBC-AM, 660 on the dial in New York. It’s now known as WFAN — “The Fan” — former home of the New York Mets, future home of the New York Yankees. But back in the Sixties, it was plain talk radio, and Mazer was on the air talking sports every afternoon. You could call him and talk about the Yanks or the Mets or the Giants or the Jets or the Knicks or the Rangers . . . whatever. Mazer knew everything. Call and ask who the second-string third baseman was for the 1923 Philadelphia Athletics, and he not only knew the guy’s name, but his batting average, what city he was born in and what brand of cigarette he smoked. Mazer knew the name of Pele’s barber. He not only knew that Phidippides ran the first marathon in ancient Greece, he knew Phiddy’s mile splits and who came in second and third. Mazer was an encyclopedia of sports, and if you were a young obsessed fan in the late Sixties, you made sure to tune in every day.

Which brings us to Alberta Magzanian, Czarina of Room 36, who taught history to high schoolers at Brooklyn Friends School. When she was out of earshot we called her Maggie. But if she was in the neighborhood, she was Miss Magzanian. There she is, standing with my class, the petite woman in the front. I’m just guessing here, but I’ll bet she was standing on a stool of some sort, because she was way, way shorter than Betsy on her right and Candy on her left.

Maggie was petite, but who knew? She was a powerful lecturer, a forceful teacher, and she had a stare that could knock out Muhammad Ali. Never mind her size; Maggie was a giant, feared and highly respected by one and all.

Maggie ruled the universe from Room 36, which not coincidentally was the temperature she maintained in her classroom from December until March. A cold room keeps you awake, and heaven help you if you nod off in Maggie’s class. Besides . . . If you were smart enough to pay attention, you damn well would learn a helluva lot.

As for fear . . . she introduced to one and all the most dreaded five-word command in the English language:

Take A Piece Of Paper.

You’d show up for history class, and there would be the usual banter, some announcements, but the fact was that you were sitting at your desk, trembling. Because at the beginning of every class Maggie had already determined which way it would go. If she got up and turned to the blackboard, you could exhale.

Or she’d say “Take a piece of paper,” and deliver a spot quiz. A very tough spot quiz. A spot quiz that required more than listening in class and doing your homework; it required thought and understanding of the subject matter. Maggie’s goal was not just to teach history; it was to make you understand why it mattered.

Which brings us to late May in 1968. I was thoroughly enjoying my senior slump, because what’s the point of being a senior in high school if you can’t have a senior slump? I had already been accepted to the 1968-69 freshman class at Hobart College, and I had much more important pursuits — music, girls and baseball come quickly to mind — than mastering American History.

So I skated through my spring classes until the night before the American History final exam, at which time I opened up my textbook and the notebook in which I’d been scribbling down everything that was said in class every day for the last nine months, and I sat down at the kitchen table to do some heavy-duty cramming.

Only Bill Mazer was on the radio.

And there was a serious discussion taking place, namely who should be the Yankees’ shortstop — Tom Tresh or Phil Linz?

And I just had to tell The Amazin’ that the Yankees were nuts.

And this went on for about two hours until I finally got through, whereupon I got put in the queue of callers.

And I waited. And then I waited some more.

And my mom said, are you studying for your history exam?

And, with the phone propped up to my ear, I said hell yeah I’m studying, can’t you see I have my textbook open? Whaddya think I’m doing?

And I finally got through, after about three hours of dialing and waiting, and The Amazin’ came on the phone and said hello and I said hello back and I said I wanted to talk about how the Yankees should be playing Phil Linz at short, and not Tom Tresh, and what on earth were they thinking because Linz was a much better shortstop. And The Amazin’ told me he respectfully disagreed and cited a gazillion statistics that he didn’t have to look up, because The Amazin’ never had to look up any damn statistics, he just knew them. And we agreed to disagree and he thanked me for calling and then went to commercial.

And then I stewed for a while because I really did think the Yankees should be playing Linz, and I couldn’t stand the notion that The Amazin’ didn’t agree with me. And then we had dinner. And then I went up to my room to do a little cramming with the radio on. I can’t say for sure, but I probably was listening to the ballgame while I glanced at my history textbook. And then I went to bed.

And the next day I showed up in Room 36 to take Maggie’s American History final. She passed out the blue books and wished everyone good luck, and I took a quick look at the questions she’d asked, and it was then that I discovered that maybe I should have spent a little more time cramming and a lot less time dialing, because this might as well have been the history of Bolivia. I would have to guess at most of the multiple-choice questions, and I would really have to fake it on the essays.

A few days later we got our finals back. I had written in blue ink, but there sure seemed to be a lot of red ink on the pages. And on the cover of my blue book was a big, fat, red F.  I had waited till the last day of high school to get my very first F.

And I deserved it.

So here’s to you, Bill Mazer. May you rest in peace.

And here’s to you, Alberta Magzanian, a tough-as-nails teacher who gave me the grade I had coming to me.