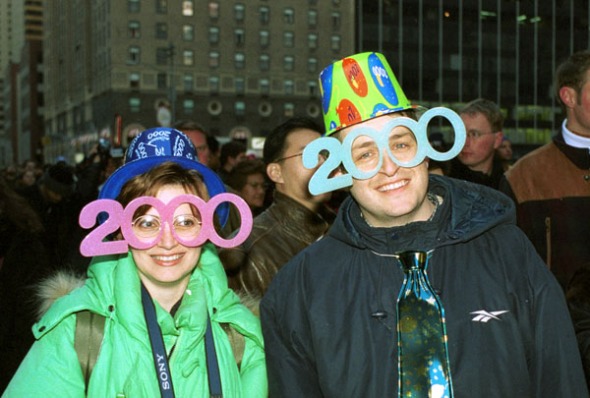 Journalists have to work on holidays, because cops and firefighters and doctors and nurses and EMTs and soldiers work on holidays, and someone has to report on what the heroes are up to while the rest of us are drinking ourselves silly.

And that’s why I always worked on Christmas. It’s not my holiday, so to do otherwise would be selfish.

But because I always worked Christmas, I always had off on New Year’s Eve. Quid pro quo, and all that.

Except for New Year’s Eve 2000, a night of work that still infuriates me, 14 years later.

I was the Page One editor of the Journal News at the time. That’s the paper nobody knows, since it isn’t famous (like Newsday) and doesn’t have a location attached to it. For the almost all of you who don’t know, the Journal News is the newspaper of New York’s northern suburbs – Westchester, Putnam and Rockland Counties. Online, they call it Lohud.com. “Lohud” stands for Lower Hudson, and they named it that because, obviously, if you’re looking for the website of The Journal News, the first thing that comes to mind is Lohud.

It’s a Gannett paper. When I was there, it had a decent-sized newsroom. After several rounds of layoffs and “forced sabbaticals,” I hear they’re down to two editors, a reporter and a janitor now. But I digress.

Pull up a chair, kids, and I’ll tell you all about the worst New Year’s Eve ever, the night I had to work at The Journal News because the Powers That Be lost their minds.

Let’s start with the fact that, because I worked Christmas, as always, I requested – and was granted, and had made plans for – the night off on New Year’s Eve 2000.

Only some crank decided that the world was going to end that night at the stroke of midnight. They called it the Y2K bug – an event that was going to cripple every computer in the world and plunge all the citizens on earth into darkness at 12:00 a.m. Eastern Standard Time. Airplanes would crash. Cars would come to a dead halt. Lights would go out. Our money would instantly vanish from our bank accounts. Toilets would explode. And who knew what might happen at the Indian Point nuclear power plant just 10 or so miles away?

There was no disaster that could escape the Y2K bug.

I felt otherwise. For starters, I said, we use Macs to design our pages, and Macs were designed not to have a Y2K bug. And all the PC manufacturers said they had already rewritten their code to avoid any potential problems. Also, I noted, midnight comes at 24 different times every day. So if this was going to happen, it would certainly happen in Australia 13 hours before it happened in New York. And if it actually DID happen, then I’d rush to the office, because that would be actual news.

Nonetheless, the Powers That Be bought into the great fear, and so a day or two after I worked Christmas, the edict came down . . .

All employees, without exception, must work New Year’s Eve.

Even the ones who, at that point, will have been working 11 days straight.

I protested. This is ridiculous, I sort of said (I believe I actually used a much stronger word).

No exceptions, they said. Even the Executive Editor and Managing Editor will be in the office that night.

But neither of them worked Christmas, I noted.

They didn’t like that. The Powers That Be hate logic.

But there was more . . . How could you not want to work New Year’s Eve when the Powers That Be were offering a great incentive . . . the usual added bonus, the one that never fails to excite journalists:

We’ll have a caterer bring in some chicken marsala, a tray of ziti, crudités, cans of soda. How’s THAT for a New Year’s Eve celebration?

Well, it wasn’t what I had in mind, which was a pleasant evening by a roaring fireplace with my wife and kids. Pop open a bottle of champagne (AP style says to capitalize the C, but this is my blog and I can do what I want), sit back, watch the ball drop, exchange a round of kisses and go to sleep.

But nooooooooo. Not this year. Not when there’s a Y2K Bug that’s going to kill us all.

And so it came to pass that I sat in the office, seething, grumbling, eating a carrot stick and laying out the front page of the first newspaper of the new millennium. A New Millennium Commemorative Edition, we called it, and we bannered it across the top of the front page so it would never be forgotten.

We wrote some silly stuff about how the world rang in not just a new year, but a NEW MILLENNIUM!!!!, and we used all the usual pictures from Brisbane to Times Square, and we published the thing and went home. It was an event so memorable that The Newseum doesn’t offer it among its “memorable” archived Page Ones.

And here’s the best part . . . At 11:45 p.m., the edict came down from the Powers That Be: All computers MUST be shut down immediately in five minutes and remain off until 12:10 a.m. This was to ensure that if the Y2K bug hit, our computers would not be operating at the time. So just when we’re supposed to be working our hardest, we would be doing absolutely nothing. Just another WTF moment in the history of journalism.

Just three months later, I was gone. To a dotcom. The executive editor, Bob, asked me why I would want to go work for an Internet news site. “The Internet? Only kids use that,” he said.

I’m still waiting for the Y2K bug to hit. Maybe next millennium. I’ll make sure not to work Christmas the week before.

1 thought on “The worst New Year”