Rockland County, N.Y., where I’ve lived for nearly 40 years, is home to the third largest population of Hasidic Jews in the world, trailing only the entire nation of Israel and New York City. Which explains why, in a previous millennium, when I was the Page One editor of The Journal News, the newspaper of New York’s northern suburbs, a reporter and photographer were assigned to cover what was either the bar mitzvah or the wedding of the grand rebbe’s son in New Square, N.Y.

Bar mitzvah or wedding. I’m not sure which one, because I wasn’t invited. On the other hand, I didn’t have to buy a gift.

New Square is a small hamlet (are there large hamlets?) accessed by a single road off a main road that runs through the county. Drive in a block or two and it suddenly feels like you’ve time-traveled back to 18th century Europe. Drive in on a Saturday – Shabbos – and you’re in the only car in town that’s moving. And that guy who looks like he just dropped in from Mars – thats you, because you’re the only guy in town who isn’t sporting a full beard and a long black coat and a wide-brimmed black hat.

The newspaper photographer – whose name I have forgotten but whom I will gladly credit if someone can tell me who he was – shot numerous photos, one or two of which we ended up using in the paper. But the one at the top of this post never saw print, because it didn’t really work for the story.

It was, however, my favorite. I called it “Where’s Waldo.” Look close – really really close – and you’ll see why. Need to see it larger? Click on the picture.

I’ve had that photo on my mind this week because, well, I’m a live-and-let-live kind of guy when it comes to god and stuff. It’s your religion, they’re your beliefs. Who am I to criticize? You happy, I happy.

That is, until you stick your religion in my face and cause me great inconvenience. Then I’m not happy. Then we have issues.

Last week we had issues. On the eve of Rosh Hashanah, the Jewish New Year, a Tel Aviv-bound El Al flight preparing to depart from JFK was disrupted by a large number of Hasidic men who refused to sit next to women.

Because, you know, women. Eeuuw.

(A tip of my wide-brimmed black hat here to my friend, David, who tipped me off to this story.)

This meant, of course, that the plane would remain on the tarmac, because the airlines have this thing about putting your seat in the upright position and fastening your seatbelts and turning off all electronic devices before takeoff. Them’s the rules, fellas.

“People stood in the aisles and refused to go forward,” said Amit Ben-Natan, a passenger who was on board the plane.

“Although everyone had tickets with seat numbers that they purchased in advance, they asked us to trade seats with them, and even offered to pay money, since they cannot sit next to a woman. It was obvious that the plane won’t take off as long as they keep standing in the aisles.” ….

Galit, another traveler on the flight, said the ultra-orthodox passengers suggested she and her spouse split up to better accommodate their desired seating arrangements: “Why should I agree to switch places?” she said with anger.

After she refused, the haredi man seated next to her conceded, but it was only temporary: “I ended up sitting next to a haredi man who jumped out of his seat the moment we had finished taking off and proceeded to stand in the aisle.”

It seems that after takeoff a large portion of the haredi travelers took to the aisle to pray which, according to their fellow travelers, crowded the aisle and caused the flight to be unbearable.

“I went to the bathroom and it was a mission impossible, the noise was endless,” Galit said.

Ynetnews even provided a photo taken by a passenger, because smartphones are such fun: 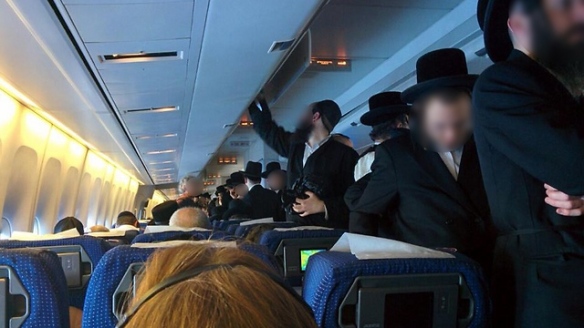 Now, as I was saying, I’m from Rockland County, where we’re hardly unaccustomed to this sort of thing. A similar kerfuffle (my friend Lenae loves it when I write kerfuffle) happened 20 years ago when a private bus company called Monsey Tours, which operates out of Monsey, N.Y., which has a very large ultra-orthodox Jewish community, had a curtain that ran down the center of its buses to separate the men from the women when the men wanted to pray. Because, you know, women. Eeuuw.

And that would have been fine and good, since Monsey Tours is a private company operated by a Hasidic family in – you guessed it – New Square, except for one thing:

But that curtain stood there for decades, separating the boys from the girls, until the day a Soviet immigrant named Sima Rabinovicz decided to channel Rosa Parks. Sima the Soviet had the audacity to refuse to get out of her seat when the men on the bus decided it was time to close the curtain. The men ordered Sima to move to another seat so they could pray without having a woman in their midst. (Need I repeat why?) Sima said one of the men even threatened to stone her to death, which just goes to show that the whole stoning-of-wayward-women thing isn’t limited to one religion. Why should they have all the fun?

It’s quite a story, and, really, way too long to tell here. Here’s how the New York Times covered it.

Anyway, as I said way up at the top . . . I’m all for your right to practice your religion however you choose. Knock yourself out. But do not think for even a moment that you have the right to impose your religion on me, or to use it to inconvenience me in a public place. If you tell my wife to change her seat on a plane and go sit next to another woman so that you can sit next to me because your religion won’t allow you to sit next to a woman – because, you know, women – then I strongly suggest that you get off the plane and find alternative transportation.

Charter a plane. Row a boat. (Head east, go through the Straits of Gibraltar and keep on going till you hit land.)

Or swim. The sharks will give you something to pray for.

And what I really want to know is why El Al, when faced with this brand of chutzpah, didn’t turn the plane around and have these guys arrested for disrupting a flight.

To be clear, guys, you have freedom of religion. It’s a great country. But your freedom of religion stops when it interferes with mine. If you can’t mingle with the rest of us, then you’re free not to mingle. Your rowboat is waiting.

Now go back and find Waldo, folks. And have a Happy New Year.

3 thoughts on “Stop the plane? Not a prayer”