This wasn’t supposed to happen. Sure, I was just 13, but I read the New York Post, the New York Times, the Daily News, the Herald Tribune and Sports Illustrated and I watched TV and I listened to the radio and all the experts said Cassius Clay would be crazy even to appear in the same building with Sonny Liston, let alone the same ring. Hell, he’d be crazy to set foot in the same ZIP code, a newfangled thing that had been invented the previous year.

Sonny was a monster. He was big and way too strong and he had a couple of sledgehammers hanging from his shoulders that could kill a skinny, 22-year-old pretty boy. He would hit Clay so hard, the experts said, that his fist would come out the back. Clay would certainly leave the ring on a stretcher. He’d be lucky, the experts said, to still be breathing.

Keep in mind that Sonny had become Heavyweight Champion of the World two years earlier, in 1962, when he knocked the incumbent champ, Floyd Patterson, out in the first round. The First Round!  A year later, Sonny proved it was no fluke. He sent Floyd to the canvas three times, all in the first round, and Floyd had the good sense not to try for four. After all, he’d scored a victory of sorts. The first fight ended at 2:06. The second ended at 2:10. Floyd lasted four seconds longer the second time around.

Which brings us to Feb. 25, 1964, when an essentially untested and unproven 22-year-old kid with an awesome name — Cassius Marcellus Clay — stepped into the ring with Sonny.

Robert Lipsyte of the Times, in a wonderful video retrospective, recalls that his bosses told him to rent a car and see how long the trip was from the fight venue in Miami Beach to the hospital. Because that’s where Clay would surely be spending the night after the fight. It was either that or the morgue.

And I bought all of it. I was in the eighth grade and there was a fool named Evan in the seventh grade who kept telling me that Clay was going to win, and I told him to put his money where his stupid mouth was, and I even got him down to 4-to-1 odds when he should have known that Liston was 7- or even 8-to-1. But hey, he was a seventh-grader, nowhere near as mature and worldly as I was. It wasn’t my fault that he didn’t know the betting line. It was my buck to his quarter, but the experts all said that buck would be staying in my pocket, and a quarter went a long way then. We’re talking two comic books and pack of Life Savers.

The night of the fight, I knocked off my homework quickly so I could settle down and listen to Sonny kill Clay on the radio. I figured if Floyd went down at 2:06, Cassius wouldn’t last a minute.

Six rounds later, Sonny, bloodied, sat on his stool. He didn’t come out for the seventh round. Here’s not looking at you, kid: 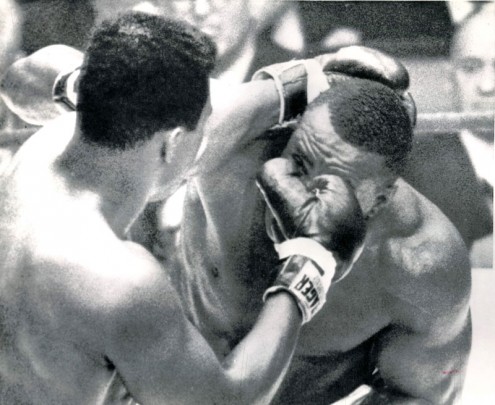 I was out a buck, and I swore I would never bet against Clay again.

As it turned out, I couldn’t bet against Clay again even if I wanted to, because that was the last we saw of Cassius Clay. The new champ gave Sonny a rematch a year later, and he had the same big mouth and pretty face, but he’d changed his name. He insisted on being called Muhammad Ali, though you’d be hard-pressed to find a newspaper, magazine, TV or radio reporter who’d call him that. Back then, the men in power didn’t respect such decisions.

The second fight took place in a place nobody’d ever heard of — the boxing hotbed of Lewiston, Maine — because no major city wanted to risk hosting it. The champ was a Black Muslim; the ex-champ, now the challenger, had been arrested for speeding and reckless driving with a loaded .22 in his pocket. So this place called Lewiston said they could fight there. They brought in Robert Goulet to sing the Star Spangled Banner and it soon became apparent that nobody had bothered to ask Goulet, a Canadian, if he knew  the words. And the crowd got behind Liston, who had a long rap sheet, because even then, America preferred criminals to Black Muslims.

The fight didn’t last long — if you blinked, you missed it. Even if your eyes were wide open, you might have missed it. But it gave us one of the most memorable photos in boxing history: 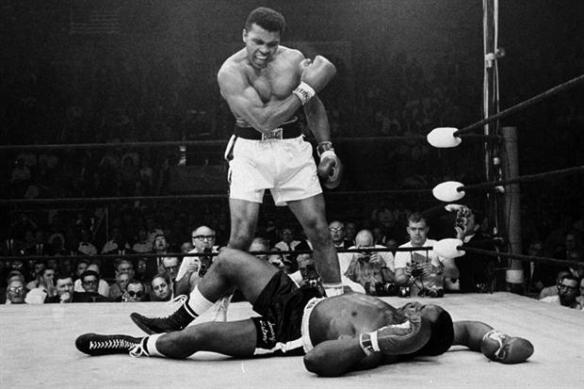 Muhammad Ali was still pretty, but he wasn’t skinny anymore.

Fast forward a decade and I’m in the Sports Department at the New York Post, with the exalted title of Editorial Clerk.

It’s October 30, 1974, and Muhammad Ali has become, as Post sportswriter Larry Merchant called him, Cassius Muhammad Marcellus Ali Clay Baby. He’s given up three years of his career to the Justice Department, he’s lost his title to Joe Frazier in Madison Square Garden, and now the guy they rooted to get killed by Liston is the People’s Champ. And he’s in the heart of Africa, in Kinshasa, Zaire — a country that doesn’t even exist anymore — where George Foreman, the second coming of the untouchable Sonny Liston, only without the arrest record, is a heavy favorite to beat the bejeezus out of him.

Foreman has done to Frazier what Liston did a decade earlier to Patterson, knocking Smokin’ Joe down six times before the ref stopped the massacre at 1:35 of the second round. George demolished Joe, who had beaten Ali, and now he was going to fight Ali, who was the odds-on favorite, again, to spend the night after the fight in the hospital, if he was still alive.

But I learned my lesson when I was 13: You don’t bet against Ali.

I was a man of great maturity now — I hadn’t so much as thought about my old pal Evan in years — so I paid a formal visit to Freddy the Bookie downstairs in the Post’s mailroom and plunked my money down on Ali, who was a 3-to-1 underdog. Thirty bucks if I lose (essentially two comic books and a Coke), ninety bucks if I win. I was what you call a big bettor now.

And then I took my beautiful bride-to-be to the Sheraton or the Waldorf or some other fancy midtown hotel where the big machers of New York journalism were going to watch the fight on closed circuit TV in the ballroom. And we sat down in our chairs behind some beefy cigar-smoking know-it-all who guffawed loudly when he learned my money was on Ali. If he didn’t call me a fool, he certainly implied it. And he called me “kid,” when anyone could clearly see I was all grown up at 24. And he was saying these things in front of Linda, too. I hate guys like that.

And, of course, he made sure to turn around after the first round to tell me my guy didn’t have a prayer. And he did it after the second round, too. And after the third. My guy was gonna die, he said.

But it wasn’t long before he stopped turning around, because Ali had just invented the rope-a-dope. He’d let Foreman pound away on him for about two and a half minutes, until Foreman’s arms felt like lead. 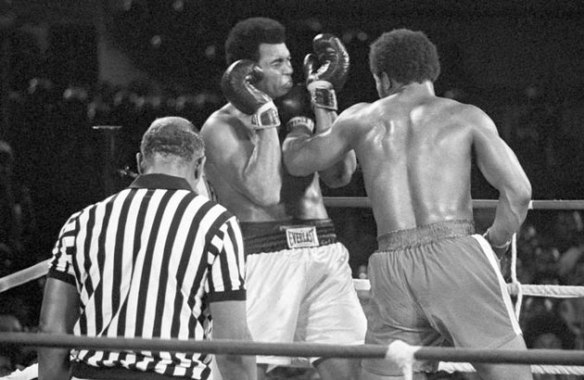 And that’s when Ali would come bounding off the ropes, fists flying, and right on target.

And then down went Foreman. 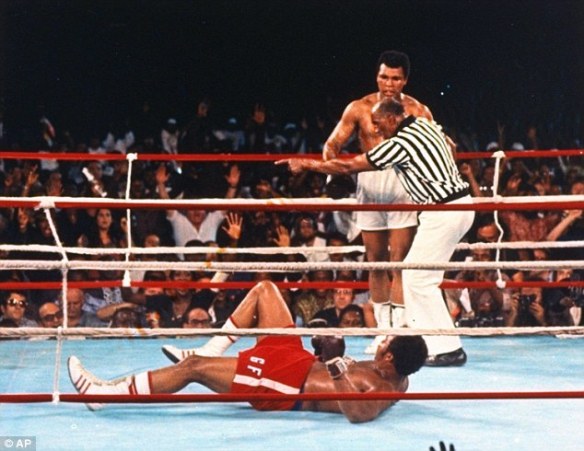 And he stayed down.

And, yeah, it was nice taking 90 bucks from Freddy the next day. But much sweeter was looking that cigar-smoking know-it-all in the eye when the fight was over, and bidding him good night.

I got to see The Champ fight live once.

Ken Norton, an ex-Marine with the body of a Greek god, won a split decision from Ali in March of 1973. Norton was a 5-to-1 underdog, but Ali didn’t take him seriously. I watched the fight in a bar on Long Island, and the entire room was stunned. This was not supposed to happen.

Six months later, they fought again, and this time the split decision went to Ali.

Three years after that, on September 28, 1976, Ali and Norton had their rubber match. In Yankee Stadium.

And one of the perks of being in the sports department at the New York Post was that it wasn’t very hard to get tickets to sporting events, sometimes at cut-rate prices. And so it was that Linda, now my bride, and I found ourselves sitting on the field, right where third base was supposed to be, watching a fight that took place in a ring set up behind where second base was supposed to be.

Ali and Norton went the distance, but it wasn’t a great fight. Ali won eight of 15 rounds on all three scorecards, and a lot of people came away thinking he’d actually lost. The Champ was no longer the guy who’d beaten Liston or fought three of the toughest fights in history against Frazier, but he came away with the W and I got to say I was on third base at Yankee Stadium. Just like Graig Nettles.

The late Vic Ziegel, a great sportswriter, told me once that he owed so much to Ali. If not for Ali, he said, he’d never have been able to see Kinshasa, Kuala Lumpur, Manila, Tokyo …

Ali took him around the world, Vic said. What could be better than that?

Vox compiled nine profiles of The Greatest. All are worth reading.

Thanks to YouTube, we have the privilege of watching most of Ali’s fights whenever we want. I could post a couple of dozen videos here, from Miami Beach to Madison Square Garden, from Manila to Zaire. But those are the ones everyone talks about. The one I love is Ali vs. Cleveland Williams, in the Houston Astrodome, in 1966.

Williams, like Liston, like Foreman, had a devastating punch. He could knock you out with one blow. In fact, over a long career that spanned 78 wins, 13 losses and 1 draw, he knocked 19 guys out in the first round.

He was an old man of 33 when he fought Ali, but everyone knew that if Williams found your jaw, you were going down. As the announcer said, “They call him the Big Cat. He throws bombs.”

But the Big Cat never had a chance. He’d pounce, and Ali would already be behind him. The Champ won on a TKO in the third round, and he put on a display of speed and grace unlike anything we’d ever seen before or likely will see again. Ali was a heavyweight, but he had the moves of a welterweight. He floated like a butterfly. He stung like a bee.  He was The Greatest.