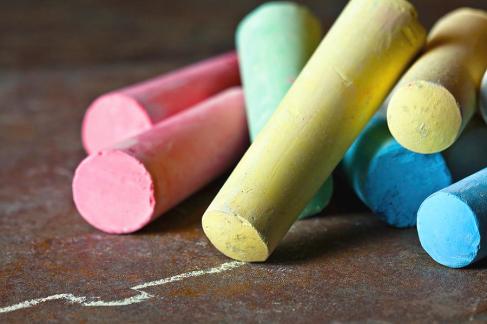 SAN DIEGO — A protester is standing trial on criminal vandalism charges in San Diego, and faces a sentence of up to 13 years in prison if convicted, for a scribbling a series of anti-bank slogans in chalk on a city sidewalk.

Mayor Bob Filner has denounced the prosecution of Jeff Olson, 40, a man with no previous criminal record, as a waste of taxpayer money and an abuse of power that infringes on First Amendment free speech protections in the U.S. Constitution.

“This young man is being persecuted for thirteen counts of vandalism stemming from an expression of political protest that involved washable children’s chalk on a city sidewalk,” the mayor said last week in a memo to the City Council.

The city attorney, Jan Goldsmith, defended his pursuit of the case in remarks published on Thursday in the U-T San Diego news website, saying: “We prosecute vandalism and theft cases regardless of who the perpetrator or victim might be.”

If writing on the sidewalk with chalk is vandalism, punishable by up to 13 years in prison, then let’s just put every American kid in prison now and save ourselves the wasteful cost and effort of millions of trials.

Seriously . . . Is this prosecutor out of his mind? What on earth might he be thinking?

I’m feeling so guilty right now. I confess . . . When I was a kid, I used to write all sorts of stuff in the streets of Brooklyn. With chalk. I made bases and home plates for games of stickball and punchball. I made boxes for games of scully. (I have no idea why it was called scully, and I couldn’t begin to tell you how it was played, except that you needed bottle caps. And chalk.)

Thank goodness the cops never caught me. I reckon I did it enough times to warrant a life sentence.