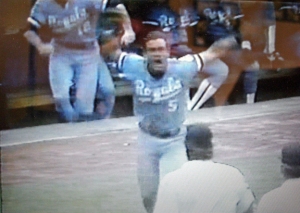 It has been almost 30 years since Brett tore out of the visiting dugout at Yankee Stadium on July 24, 1983, and raced maniacally toward Tim McClelland, the home plate umpire. McClelland had just ruled Brett out, wiping out his go-ahead, two-run homer, because he had too much pine tar on his bat.

Probably the greatest on-field rampage of all time. Thirty years on, it still has to be seen to be believed. Watch and enjoy. You’re welcome.

Let’s just say she’ll have no problems with wardrobe. 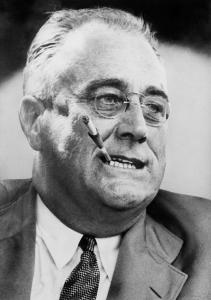 INDIANAPOLIS (AP) — A professor at an Indiana college says he has found film footage showing President Franklin Delano Roosevelt being pushed in his wheelchair, depicting a secret that was hidden from the public until after his death….

Roosevelt contracted polio in 1921 at age 39 and was unable to walk without leg braces or assistance. During his four terms as president, Roosevelt often used a wheelchair in private, but not for public appearances. News photographers cooperated in concealing Roosevelt’s disability, and those who did not found their camera views blocked by Secret Service agents, according to the FDR Presidential Museum and Library’s website.

Hard to believe there was a time when a disability as crippling as polio could be kept secret from the public, and that the press was complicit.

Now we’ve gone so far as to tell the world whether our president wears boxers or briefs.

On the other hand, we always knew for sure that FDR smoked cigarettes.

Take cameras out of the courtroom (Kathleen Parker, Washington Post)

As a courtroom junkie since my early reporting days, it is at great personal sacrifice that I suggest the following: It may be time to get television cameras out of the courtroom.

Or at least, judges might be encouraged to exclude electronic media from high-profile trials.
I have very mixed feelings on this one. Parker is right . . . The cameras have turned this and several other trials (O.J., Casey Anthony, Jodi Arias) into media circuses — more theater than trial.
But criminal trials are supposed to be held in public, and the cameras enable all of the public to witness the proceedings — not just the folks lucky enough to get into a small courtroom. Cameras would have come in very handy during the civil rights years; I think it would have been good for the entire world to watch how suspects who were clearly guilty  got acquitted.
It would be nice to find a solution short of banning the cameras.
__________

New Yorkers, like all citizens, deserve serious and thoughtful political campaigns, but between Anthony Weiner, the former sexting congressman, and Client 9 (the name given to Mr. Spitzer in the federal investigation of the escort service he used) and the self-described madam who ran that escort service and now claims she’s going to run against her former customer, the stage is set for a summer of farce.

Mr. Spitzer, like Mr. Weiner, is a political animal who clearly finds it hard not to have an audience. That’s understandable, but did they have to bring us all along on their journeys of personal ambition? For these two charter members of the Kardashian Party, notoriety is looking like the quick, easy path to redemption.

This editorial pretty much sums it up. Tabloid editors dream of stuff like this, but New Yorkers really deserve better.

Normally, I wouldn’t give this guy even this many words, but really . . . The video tells you everything you need to know. This guy is a grade-A jerk.

Maybe if people stopped showing up at his concerts, the press would stop following his every move. And then he might find himself wondering where everybody went, and he’d have to develop some manners to go with his talent — and yes, he DOES have talent — before he totally self-destructs.

Parents, tell your little girls . . . No more Justin till the idiot grows up.