Got a whole new bunch of folks who won’t be getting invitations to my holiday party this year (including anyone who insists that it shouldn’t be called a “holiday party”). Without further delay, let’s all give a big Bronx cheer to . . .

Clarence (God Wants My Kids to Be Ignoramuses) Powell

Clarence and his wife Andrea have a dozen kids. And by all accounts, they seem to be very, very bright kids.

So how come one of his kids, who is old enough to be in middle school, can’t read?

Simple. It’s because Clarence doesn’t send his kids to school. He told the Washington Post:

[i]t’s important that parents have a role in instilling in their children a world view that does not exclude God.

It’s a sacred honor to be able to home-educate your children and instill in them values in a way that’s consistent with your faith.

OK, Clarence, fine. Home-school your kids. Feel free to brainwash them with your religion. That’s a parent’s right.

Then you’re denying your kids their right to an education.

And what’s worse . . . The state of Virginia is enabling this guy.

[Powell uses] a religious exemption that allows families to entirely opt out of public education, a Virginia law that is unlike any other in the country. That means that not only are their children excused from attending school — as those educated under the state’s home-school statute are — but they also are exempt from all government oversight.

School officials don’t ever ask them for transcripts, test scores or proof of education of any kind: Parents have total control.

I’m going to go out on a limb here and suggest that Jesus didn’t have this in mind.

Clarence Powell may be a devout religious nut, but he’s one lousy dad.

Oh . . . I almost forgot to mention . . . Clarence’s son, Josh, is the focus of The Post’s story. And he’s a real hero. Talk about overcoming the odds.

And speaking of overcoming the odds and lousy parenting, there’s this guy . . .

Our man Eddie is the former governor of Louisiana — four terms, if you’re counting — and a former inmate in the federal prison system, thanks to his involvement in a bribery and extortion scheme.

Eddie also became the father of a brand-new baby boy recently, which is why I feel comfortable calling him one very lousy dad.

Because being a dad means being there for your kids. Here are just some of the things that dads do . . .

Chances of Eddie doing any of these? Practically zero.

Eddie, you see, is 85 years old. And while some folks think it’s cute that an 85-year-old man is capable of becoming a new dad, I think it’s just selfish.

Two words for you, Eddie . . . Birth Control. You need it as much as any 15-year-old. Maybe even more, because being a dad is not a short-term proposition.

And let’s be clear . . . Eddie isn’t alone in this bad-parenting business. His wife, Trina Scott Edwards, is 34. Just what the hell is she thinking? Oh . . . I think I know. . . Reality Show!!! Yup, there’s one in the works. And a 34-year-old woman with an 85-year-old husband and a newborn baby boy will make for a great story line. 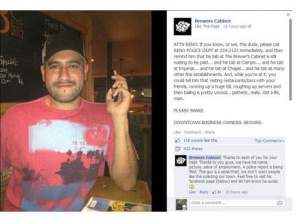 Saul (Brother Can You Spare a Dime?) Zelaznog

When you ring up a $100 tab at a brewpub, “I left my wallet at home” is not an appropriate response when you get the check.

Kudos to the owners of Brewer’s Cabinet, who posted Saul’s photo on Facebook.

Brooke (I’ll Show You the Meaning of Bigot) Goldstein

Leave it to Our Miss Brooke, who purports to be a “human rights attorney,” to figure out what makes Anthony Weiner tick. According to Mediaite . . .

During Thursday morning’s edition of Red Eye, the attorney was asked whether too much attention has been paid to Weiner’s sexting, and not enough to his politics. In response, Goldstein had a suggestion for the “real” question, as she sees it: “Why is Anthony Weiner so un-attracted to Huma Abedin?”

She then answered her own question:

“Perhaps it’s because she is connected with Islamists who want to kill us. Perhaps it’s because her family members are part and parcel of the Muslim Brotherhood. I completely agree with Andy McCarthy that she poses one of the greatest national security threats in this administration. She has access to the most classified information, because of her position with Clinton, about the Muslim Brotherhood, which creed is to destroy America.”

Way to bring some class to “Red Eye,” Brooke. Now please disappear, because you are about as low as lowlife gets.

I don’t care if it’s suspension for a year or two years or life. A-Roid, one of the greatest players ever, was supposed to be the cure for Barry Bonds and Mark McGwire and Sammy Sosa and Roger Clemens and all those others whose achievements were tainted by performance-enhancing drugs.

So much for the cure. What a bum.

Only Keith Ablow — oh, excuse me . . . DOCTOR Keith Ablow — could find a way to turn the Anthony Weiner scandal into a condemnation of the Women’s Movement.

Yes, women who seek gender equality, this is all your fault.

Read it and weep. He really does make this about women. They are sluts. It’s their fault. Obviously. Shame on you, all you women.

Here are some words spokeswomen shouldn’t use when talking to the press about their former interns:

But our gal Barbara, spokeswoman for Anthony Weiner (who seems to be all over this post, doesn’t he?), used all of them in describing a young woman named Olivia Nuzzi, who had the gall to write in the New York Daily News about her experiences working as an intern for the mayoral candidate.

Remarkably, Barbara, the spokeswoman, is still working for Weiner. Probably because there’s no such thing as going too far where Weiner’s concerned.

At his sentencing for 937 counts, including murder and kidnapping, this guy said . . .

It’s both. Yes, Ariel, you’re sick. AND you’re a monster.

This guy was sentenced to life in prison, plus 1,000 years. Not nearly enough. They can’t dig a hole deep enough to bury this guy in.