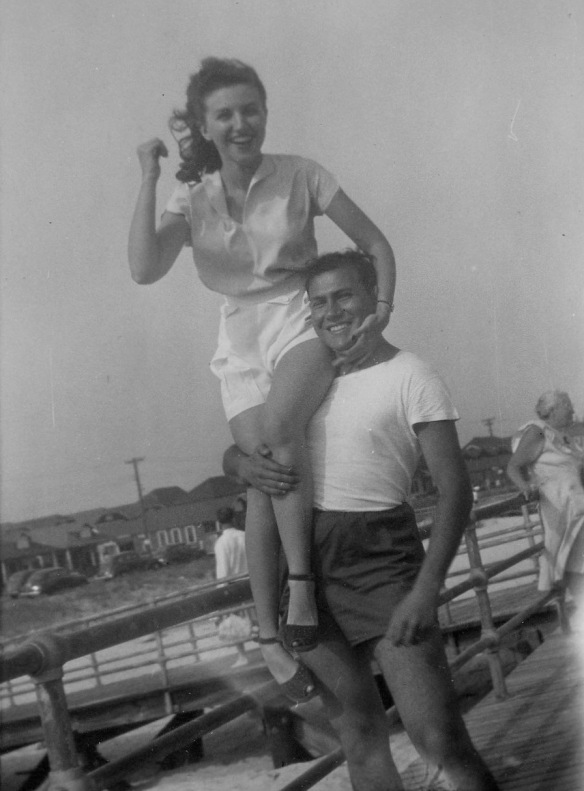 Time always wins. Early Saturday morning, it beat my dad. But my dad took it to extra innings, and it was a great ballgame … from a day at the beach with the woman who would become his bride all the way to last Thanksgiving, when they met their great-granddaughter.

My dad taught me how to throw a baseball. He taught me how to ride a bike. He knew I was fascinated with astronomy, so he woke me up at 1:30 in the morning when I was 6 years old and sat with me for an hour, looking out my bedroom window, watching a total lunar eclipse.

The first American-born member of a Jewish immigrant family, he grew up in the Depression and fought in World War II. He crossed the Atlantic on the Queen Mary, but he did it on a stretcher. The ocean liner had been converted into a hospital ship, and he had developed serious infections in both feet in Europe. He spent the next 70 years with a disability from the war, but he never complained, and it didn’t stop him from leaving our home at 5:30 every morning and coming home at 9 o’clock or later every night, six days a week, so he could give my sister and me a better life than he’d had.

He was a seltzer truck driver. Whether it was 15 degrees or 90, he’d hoist a case of 10 seltzer bottles on his left shoulder, another case on his right, and walk up four floors to his customers. Then he’d take down the empties, grab another 20 bottles and walk up those four floors again to the apartment next door. Six days a week.

One summer when I was in college, he made me join him on the truck for a week, so I could get a taste of what his life was like. I made a memo that summer to graduate from college and get a desk job.

My dad was a couple of weeks shy of his 92nd birthday when he died. His last hours were spent listening in peace to Louis Armstrong, Duke Ellington, Lena Horne and Billie Holliday. Yeah, he taught me about great music, too.

He was a great dad, a great granddad, and he would have been a great great-granddad, if his time hadn’t run out. But I never had a granddad — they both died before I was born — and my dad lived to see his grandsons turn 36 and 30. And he lived to meet his great-granddaughter.

How great is that?

4 thoughts on “For my dad, Bill Bromberg”