For starters, there’s this whole kerfuffle about the Obama salute.

The president, you see, was carrying a cup of coffee yesterday morning when he arrived in New York aboard Marine One. That’s a helicopter, by the way, which means Obama has learned to press his tie against his belt when he walks down the steps so it doesn’t fly around, whip him a few times in the face and make him look silly.  So there goes the left hand.

Now imagine the outrage we’d hear from Obama haters if the president had one of his attendants carry his coffee for him. He’s an elitist!, they’d shout. He’s supercilious! He’s a supercilious elitist! (We’ll pause while you look up supercilious. It’s a great word. Thank you, Mr. Norregaard.)

So the coffee goes in Obama’s right hand, and this presents a problem when it’s time to salute the two Marines greeting him on the tarmac. So he does what you or I do when we’re juggling a cup of coffee in the morning … like when we’re opening a door or pushing an elevator button. Obama improvises. He lifts his right hand, still holding the coffee cup, and delivers his salute.

And Obama’s numerous haters zeroed right in on the key element, and blew it up real big so it would look like this:

And America is shocked … SHOCKED!!! … because something like this has never happened before.

Next up is Bim Adewunmi, a freelance journalist and writer from London who’s spent the last couple of weeks in New York working on a book.

Bim (May I call you Bim?) writes in The Guardian:

… I have found myself spiralling into hysteria, driven slowly mad by the New York subway. On first appearance, it is like the London underground – trains, tickets, announcements, the crush of bodies. But then, slowly, the entire system reveals itself to you. It is the work of a sadist, cooked up in a fever dream and delivered with a flourish and an unhinged grin. I cannot believe I am about to type these words, but here we are: New York’s Metropolitan Transportation Authority has made me homesick for Transport for London. And I will never forgive New York for this.

I am a city girl, born and raised across the metropolises of London and Lagos, most at ease in a crowd, especially if we are all underground, blinking into a dark tunnel and awaiting a train. Over the years I have developed the ability to decipher and absorb complex, multicoloured transit maps in mere minutes. In New York this lifetime-honed skill is rendered practically useless. Here, I become an overawed simpleton. “Train go vroom but where train go?” I ask the unimpressed, triumphantly unhelpful MTA staff.

Dis is New York, Bim. We eat our pizza wid our hands; a regular coffee means milk and sugar; we don’t use woids like “metropolises” and “train carriage”; and we know how to spell multicolored, colors (your penultimate graf) and fetal (your last graf). What’s more, dere’s only one “L” in “traveled.”

Don’t like it? Go home to your monarchy, and remember: We won the war.

You don’t diss our subways, Bim. You don’t write stuff like:

The signs – a mess of fonts and colours – lack the sweet primness of London Underground’s Johnston font.

Our subways aren’t prim, Bim. They get us where we’re going, and we’re pretty much good with Helvetica or Futura or whatever that font is.

And then there’s this. I’d like to think it’s a mistake, but I’m not so sure. And I’ll bet hundreds or thousands or hundreds of thousands of buyers would never notice this.

Welcome to Babies ‘R’ Us, a place I’ve been spending a lot of time at lately, because there’s a new kid in town – in Brooklyn, to be exact, an easy ride on the subway, or as Bimmy likes to call it, the Underground – and Tenny needs to be burped and wiped and fed and clothed.

She’s my granddaughter, and she will not want for anything, which is what brings me to Babies ‘R’ Us.

Behold the four-packs of Babies ‘R’ Us diaper/burp cloths . . .

The packs are identical, soft and 100 percent cotton – just what mom and dad and grandma and grandpa and Tita need when little Tenny is puking all over their nice, clean clothes.

It’s a well-known fact. Women get paid less, and they pay more.

Men get by on a couple or three pair of shoes and maybe a pair or two of sneakers, and they wear them till they fall apart. Women, on the other hand . . .

What I didn’t know until the last few weeks was that the cost difference extends all the way down to newborns.

Let’s go out on a high note, for a change.

In Jefferson County, Colo., school administrators are involved in a very sober effort to rewrite history, proposing, as reported in the New York Times, a curriculum-review committee to promote patriotism, respect for authority and free enterprise and to guard against educational materials that “encourage or condone civil disorder.”

Respect authority, just like in the Boston Tea Party.

Guard against materials that encourage or condone civil disorder. We’ll have none of that Martin Luther King Jr. fella in our curriculum. And Susan B. who?

So here’s a tip of the hat to the hundreds of high school kids in the district who somehow managed to learn some history lessons without the assistance of the bozos behind the district proposal and “streamed out of school and along busy thoroughfares, waving signs and championing the value of learning about the fractious and tumultuous chapters of American history.” 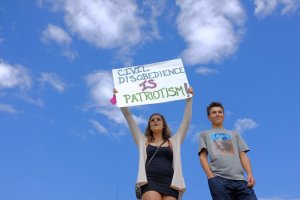 Read the sign, folks. Civil disobedience IS patriotism! Has been from the start.

The kids are all right.