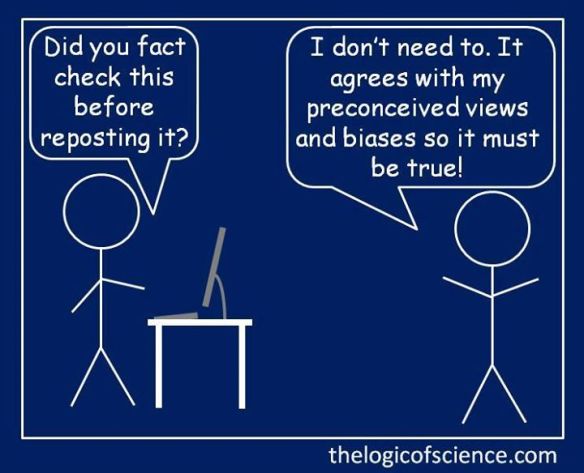 KKK, and we’re not talking strikeouts

Have you heard the news? Four – count ’em, FOUR!!! — Republicans in the U.S. Senate are in the KKK. I know this because it was reported by numerous news organizations, all of which got their information on, of all places, the Internet. There is no more reliable source of information than the Internet. If it’s there, you can take it to the bank.

The source of this blockbuster story was some wackjob claiming to be from the hacker group Anonymous.

It ain’t so, of course. Mediaite’s Alex Griswold adds up just some of the reasons why any journalist with a modicum of self-respect would question this nonsense before hoisting it up the flagpole so we can all salute.

But hey … Checking it out is soooooo old-school.

When you can’t debate the issues (Bloomberg)

“[Rubio] is the one that sweats the most. He’s the youngest but I have never seen any human being sweat like that.” ….

[Is Rubio good-looking?]  “I don’t know. I think I’m better looking than he is.”

Because he can’t see the writing on the wall … 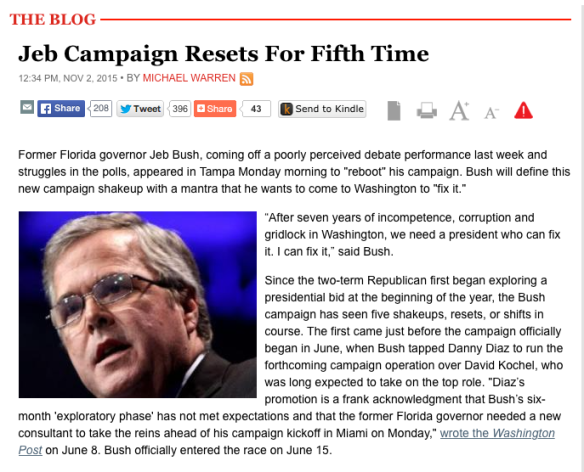 Every one of these candidates says, ‘Obama’s weak, Putin’s kicking sand in his face. When I talk to Putin, he’s going to straighten out.’ And then it turns out, they can’t handle a bunch of CNBC moderators.

If you can’t handle those guys, I don’t think the Chinese and the Russians are going to be too worried about you.”

The full list of the Republican candidates’ debate demands speaks for itself. Seems to me the best way to meet all their demands and fill the two or three hours of the debate is to divide the time by the number of candidates and then have each crybaby produce a nice, slick campaign video. No tough questions. No gotchas. No (god forbid) fact-checking. No exchanges. Best director wins the Convention.

I will submit my questions in advance for pre-approval by the campaigns. No questions will be asked about women, racial minorities or any other issue that might cast the Republican Party in an unfavorable light. There will be no questions about any candidate’s past statements or actions, including but not limited to: bankruptcies, financial difficulties, missed votes and inconsistencies. Candidates will not be required to perform math or to provide supporting evidence for claims. Candidates will be seated in Barcaloungers. If candidates feel overheated, the moderator will fan them while they answer and provide them with their choice of lemon or cucumber ice water. I will begin each question with the phrase “Mother, may I,” and I will address candidates as “Your Excellency,” “Your Eminence” or another honorific approved by the campaigns.

Separately, various reports suggested that some of the GOP contenders simultaneously want more time per candidate, more candidates onstage and also shorter debates. (And they wonder why moderators question their math skills.) At one point, Ben Carson’s campaign reportedly proposed allotting a minimum of five minutes for opening and closing statements for every candidate, which, given 15 remaining candidates, would take up at least an hour and 15 minutes alone. This would turn the debate into a series of infomercials….

And while it’s easy to mock some of these demands as petty and prima-donnish, many of them suggest a more insidious strategy: a concerted effort to extricate as much independent journalistic influence from the democratic process as possible and essentially turn the Fourth Estate into a bunch of stenographers.

Let’s toss in a foot massage, while we’re at it. 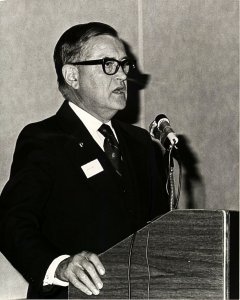 Don’t let the crematorium door slam on your way out

Yeah, I know, you’re not supposed to speak ill of the dead. But Willis Carto died a week ago, and I think this calls for a celebration. Caviar on matzoh, with some sparkling Manischewitz.

Good riddance, bigot. This world is a far better place without you in it. More oxygen for the rest of us!