Once again, we’re holding off on our long and eagerly awaited diatribe about how stupid it is that a pitcher can get everyone who faces him out and earn a blown save. We’ll just have to save that for another day, because we – unlike Jeurys Familia – will have a tomorrow.

We have bigger poop to scoop today. We had a superfecta of newsworthy political stuff last night:

Batting leadoff, playing way-outfield, the city of Houston, Texas. And yes, Houston, we have a problem.

The Houston Chronicle reports (boldface is ours):

The decision leaves Houston the only major city in Texas and one of the few nationwide without some form of a nondiscrimination law. It also marks the third time Houston voters have rejected protections or benefits for gay residents, as they did in 1985 and 2001.

The equal rights ordinance, known by its acronym HERO, would have extended local protections against discrimination to 15 groups, ranging from veterans to pregnant women to gay and transgender residents, with the latter proving the biggest flashpoint for conservative opponents of the law. In recent weeks, the contest played out on a national stage, drawing comments from the White House and top state officials as well as media attention from a slew of top outlets.

Critics pinned their campaign on the controversial claim that the law would allow men dressed as women, including sexual predators, to enter women’s restrooms. Opponents’ most talked-about ad featured a man bursting into a bathroom stall occupied by a young girl as ominous music played in the background….

Really, folks, you have to see this video. The Revolving Door got nothin’ on the door to the bathroom stall:

Bigotry toward some other groups also appears to be OK with the good citizens of Houston:

Those other groups are protected by federal law, so we won’t be seeing any pregnant single women turned away from Houston’s mangers. But federal law doesn’t protect gays and lesbians and transgenders and bisexuals. Because bathrooms.

Loyce Johnson, 70, pretty much said it best in the Washington Post:

“Anybody with a penis, I don’t want them in the ladies’ restroom,” 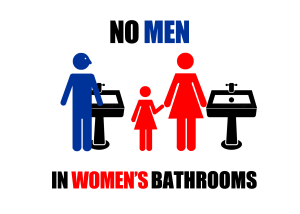 Ohio said no to legal marijuana, and CNN sent out a wonderful breaking news alert:

The drive to make marijuana legal ran into a buzzkill as Ohio voters failed to pass a ballot measure to legalize its recreational use.

So why didn’t CNN make that the story lede? I’m guessing someone was stoned.

Matt Bevin, elected to be governor of Kentucky, “is such a genuine and caring person. I will be forever thankful that he came to visit me while I was in jail. At a clerks’ meeting he hugged me and said he was praying for me. I am looking forward to his leadership as our new Governor.”

At least you’ll never ask, “Who would have guessed?” 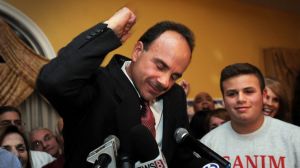 You rock, Bridgeport! The AP reports:

Joe Ganim, who was released from prison only five years ago, declared victory in a race involving seven opponents….

Ganim was sent to prison for steering city contracts in exchange for hundreds of thousands of dollars in expensive wine, custom clothes, cash and home improvements. Since his release, he has worked as a legal assistant at his family’s Bridgeport law firm, but he has been blocked by the courts from regaining his law license.

The Daily Donald (from Politico)

“Marco is overrated. … For years, I’ve been hearing that his credit cards are a disaster.”

We’re not done yet …

We are changing our star icon for favorites to a heart and we’ll be calling them likes. We want to make Twitter easier and more rewarding to use, and we know that at times the star could be confusing, especially to newcomers. You might like a lot of things, but not everything can be your favorite.

The heart, in contrast, is a universal symbol that resonates across languages, cultures, and time zones. The heart is more expressive, enabling you to convey a range of emotions and easily connect with people. And in our tests, we found that people loved it.

Wonder how much they paid the genius who came up with this.

Jeb! can fix it