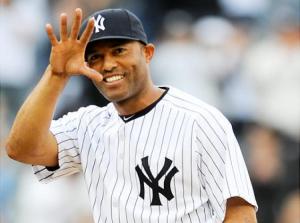 Willie Mays, the greatest player ever to lace up a pair of cleats, was a shell of himself when he said goodbye to America. He was wearing a Mets uniform by then, and all you could do was celebrate the career of a man whose time had long since passed.

No so Mariano Rivera.

It’s so rare to see an athlete go out on top, especially a star baseball player, who will play until he’s 40-something and won’t take off the uniform until his final team tells him he can’t wear it anymore. Time’s up. You’re done. 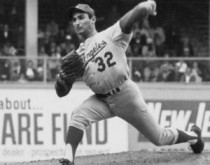 The only other ballplayer I can remember leaving at the top was Sandy Koufax, who won 27 games for the Dodgers in 1966 and led the league in everything (his ERA was a ridiculous 1.73 and he struck out 317). Sandy collected his unprecedented third Cy Young Award that fall and walked away from the game. He was 30-years-old.

But Sandy retired because his doctors told him his gifted left arm was seriously arthritic, and it would become essentially useless if he continued pitching.

I reckon these days he’d have Tommy John surgery, or something, and come back and win 30 games two years later. But that wasn’t possible in 1966.

So Sandy called it quits.

But Sandy was the only one. All the other greats saw their skills erode before they retired.

I’m a Mets fan, so I’m genetically wired to root for the Yankees lose 162 games every season.

But when Mo took the mound, even I had to root for him. You have to admire greatness.

The greatest closer in history — and one of the greatest pitchers ever — threw his last pitch in Yankee Stadium yesterday. And he did it in a Yankee uniform, the only one he ever wore. And his teammates through all those years, Derek Jeter and Andy Pettitte, took him out of the game.

The Yanks have three more games to play, and they will be meaningless — the Pinstripes are gloriously out of the postseason. So I hope they don’t use Mo in any of them, unless they want to let him play centerfield for an inning.

He went out last night on top, where he belongs. Click the picture below and see for yourself. 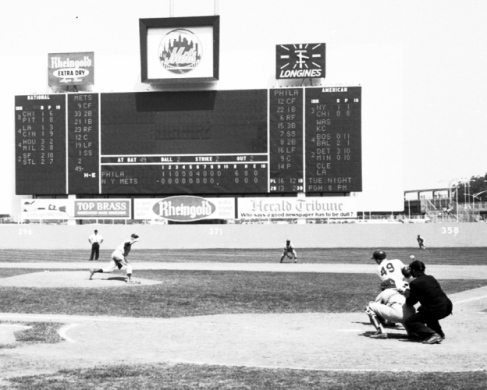 Pull up a chair, kids, and I’ll tell you about Father’s Day in 1964, and my 40th college reunion 48 years later, and how you have to be in the right place at the right time, and how the planets have to align just right, if you want to witness a no-hitter.

We start on Father’s Day, 1964, a miserably hot day in early June, and way back before the average joe was enjoying the luxury of central air conditioning. We lived in a small attached home — kitchen, dining room and living room downstairs; three small bedrooms upstairs – in Brooklyn.

My room was on the top floor, facing west. Let the sun shine in.

And it did. It shone unbearably hot, and the window fan was very effective at drawing in the furnace-level heat from outside.

But there was an air conditioner in the house – down the hall in my parents’ room – and it was calling to me. Come boy, come sit in this room. It’s cool in here.

I had a black-and-white TV in my room, and I had the Phillies-Mets game on. And Jim Bunning — great pitcher, lousy senator — was throwing bullets. And he mowed down the first nine Mets he faced. He was going to throw a perfect game, for sure. And I would be watching, if I could survive the heat.

But that AC down the hall kept calling. Come, boy. Come sit in this room. Why roast in a 100-plus-degree room when it’s cool over here on the other side of the hallway?

I was sweating more in my bedroom than Bunning was on the mound.

And I succumbed to the voice.

I walked into my parents’ room, where my dad, my mom and my 10-year-old sister were watching some godawful, sickly sweet, child-appropriate movie on TV, probably an old Shirley Temple film.

“DAD!!!” I announced, interrupting a snoring event from his side of the bed. “Jim Bunning’s pitching a perfect game!!!!” (I may have forgotten to mention that the game was only three innings old.)

I don’t remember if my dad opened his eyes, but my mom and my sister shot me a look that told me in an instant that there would be no changing the channel on THAT television. You have your own TV in your own bedroom, Stephen. We have permitted you to have one in your room so that you can watch your stupid baseball games there while we watch our child-appropriate fluff in here.

You want to watch the ballgame? Go to your room.

This was a true dilemma: I could suffer heat stroke in my room watching what inevitably would turn out to be just another Mets loss to a fine pitcher . . . or I could sit in a delightfully cool room bored out of my mind as my sister enjoyed some horrible child-friendly movie.

I chose poorly. I sat down and stewed in a cool room, and it wasn’t until a few hours later that I learned that Bunning had, in fact, pitched a perfect game.

Yeah, I missed it. And in so doing, because that’s how the baseball juju works, I also set a precedent. Little did I know at the time that Bunning’s perfect game was just batting practice for my lifetime of either missing no-hitters or watching intently until the last moment, when some nobody would break one up. Either way, I would never get to see one.

I was hosting a July 4 backyard barbecue in 1983 when the Yankees’ Dave Righetti no-hit the Red Sox. Missed it.

I wasn’t watching 10 years later when the Yanks’ Jim Abbott no-hit the Indians, an unbelievable feat considering that he had only one hand.

I wasn’t watching when David Wells, battling a hangover, threw a perfect game against the Twins in 1998.

I do remember that I was at work one year later when David Cone was perfect against the Expos, and I had to quickly re-design the front page of the Journal News. So, yeah, I missed that one, too.

I ignored a screaming bladder in 1969 for about five innings so as not to disturb the juju when Tom Seaver took a perfect game into the ninth inning against the Cubs, only to see my chances go down in flames when somebody named Jimmy Qualls — the immortal Jimmy Qualls — dunked a ball into the outfield to break it up.

Seaver finally pitched one for Cincinnati, but, of course, you couldn’t see it in New York.

Nolan Ryan threw seven no-nos. But he threw them all after he left the Mets, and I saw none of them.

Sandy Koufax had four, but he threw them all for the LA Dodgers, not the Brooklyn Dodgers, and I saw none of them.

I set my VCR to record every game Dwight Gooden pitched for a couple of years because Doc, in 1985, was the best pitcher I ever saw, and surely he would throw a no-hitter or three while I wasn’t watching.

But it wasn’t to be. Not with the Mets. 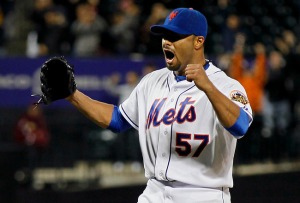 I suffered 50 years waiting for somebody on the Mets, to throw a no-hitter. And when they got Johan Santana, I figured it just might happen. So, of course, when it finally did, I couldn’t watch. It came on June 1, 2012, and I was in Geneva, N.Y., at my 40th college reunion, hoisting a beer with old friends at an official reception when I got a text message from my son, Ben, informing me that Santana had a no-hitter going after eight innings.

There was not a TV to be found. I waited 50 years to “watch” the last three outs on my iPhone, pitch-by-pitch. It’s an interesting way to watch a game, but it’s just not the same.

And that’s the way it has gone. If you want to throw a no-hitter, make sure Bromberg isn’t watching.

With one exception. Stay tuned.